Vladimir. An infamous scientist known for experimenting on vagrants and drug addicts while living shamelessly comfortable in his Victorian house.

Avoided by neighbors, accustomed with the police, renowned by shady political figures.
Intelligence and boredom created his obsession with finding cures to odd diseases using whatever means necessary.
And what better way to fuel it than to solve the puzzle behind the biggest biological threat of the century?

Corpus Inedia – A deadly virus engineered in laboratories as a biological weapon for desperate times.

Reckless use during military campaigns offered the pathogen an opportunity to escape and spread. The infection attacks the victim’s nervous system and early symptoms include heavy hallucinations.

Corpus Inedia is an 18+ nonconformist pick your path, point and click adventure game. It follows the struggles of a researcher with slightly macabre intentions. The company for which he was developing the cure betrayed him and now he’s out for revenge… or is he?

It’s up to the player how to react in certain situations. The decisions will deliver a different outcome, and thus a different ending to everything.

‘I see you’re still smoking those plants of yours’ he said with an ugly grin. ‘You didn’t tell me how you made them grow so fast…’

What the heck is happening?

In this first game you will see the world through the ghetto scientist’s eyes. Usually, your day would start off with a few coffee cups for breakfast followed by some home-made substances ending with a good night’s hazy sleep all the while working on an antidote in search for fame and more importantly money – money to spend on prostitutes and other temporary pleasures.

You were betrayed by the organization which funded your research and now you must do…at least two things: remake the antidote which was stolen and find a way to get revenge.
Considering the amount of drugs, sex toys and bondage “tools” available in this 18+ game…you shouldn’t have any problems with the latter one.

How is this different than other point and click games?

As logical as the world seen through Vladimir's eyes in his volatile states.

Combining every item with the rest of the world is not fun. Corpus Inedia has a lot of miscellaneous funny interactions which are not required to advance in the game.

Every now and then the player is required to choose an option out of a few, each leading to a different outcome. Not fake choices here. Fuck em.

Offensive for some, mild for others

This can be avoided by the player if he so wishes to, but why the fuck would he want that? 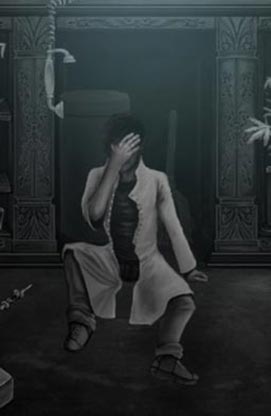